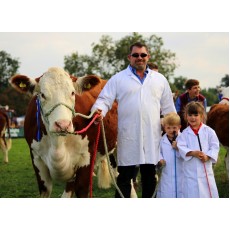 Moreton Show may be cancelled for this year but the man heading preparations for 2021 has insisted that everything is being done to make sure that one of the country’s biggest one-day agricultural shows will be back.

Moreton Show should be happening on Saturday, September 5 but, like every other major event in this country, it is not being held because of the Coronavirus.

Tom Hayman-Joyce, the local estate agent who takes over from Ed Hicks as Moreton Show chairman for the next two years, said: ‘The decision was made to cancel this year’s show back in June and events have proved us right. Hindsight hasn’t changed anything but we are constantly looking at plans for next year’s show and reviewing the latest guidance on what life might look like in 2021. Everything is always under constant review.

‘I want to make sure that the Moreton in Marsh and District Agricultural and Horse Show Society and the show it organises comes through the current situation and emerges intact because it’s vital on so many levels that this show – like every agricultural event – continues.’

Moreton Show, which celebrated its 70th anniversary last summer, has been taking place on Old Farm, on Lord Dulverton’s Batsford Estate since 1949 and had suffered only three cancellations before COVID-19. Foot-and-Mouth Disease put paid to the show in 1952 and 2001, while a torrential downpour and flooding caused a last-minute stoppage in 2008.

This year, the show’s absence has left a massive gap in the social and business diaries of farmers, competitors and traders who look forward to joining the 25,000 visitors who flock to this corner of the north Cotswolds on the first Saturday in September.

For local farmer, Mike Shaw, from Ilmington, near Shipston-on-Stour, it means missing the chance to put some of his finest bulls in the showrings.

Mike, who with his children Sid and Mia was the star of the poster for the 2019 show, said: ‘Moreton Show is everyone’s shop window and we’ll miss it. No-one knows what the economic impact will be of this show not happening this year. The cancellation of Moreton Show has come as a big disappointment but we can handle it for one year. Social media has come into its own over recent months and people are still moving animals but possibly not at the prices they might be used to.

‘For a lot of people, the show is a social occasion too. It’s where farmers and their families get to meet up and in a business such as farming, that’s a rare treat.

‘But Moreton Show will be back – bigger and better than ever, I’m sure. They’re probably going to need bigger marquees to fit everyone in. Farming will survive and we’ve been luckier than so many people throughout this pandemic. My children are disappointed to miss the show because my daughter was looking forward to showing her heifer at Moreton. The children were lucky to have had the farm to play on during lockdown so we’ve counted our blessings.’

The Hereford Cattle Society has been holding its National Show for Poll Herefords at Moreton since 1967 and David Deakin, the society secretary, acknowledged that the cancellation was a big blow. ‘Moreton Show is one of the most important shows for the society in the year,’ he said. ‘It has, probably, the biggest entry of Herefords in Europe and is a very prestigious show for the society.

‘The Hereford Society has not lost out financially because of the cancellations, mainly because we’ve not had to make any financial outlays. What isn’t measurable yet is the knock-on effect over the next 12 months on our promotion of the breed and the society.’

Herefordshire-based Richard Bartle has been involved in Limousin cattle since 1980 and he’s been a regular winner at Moreton Show. The farm manager at Kipperknowle Farm, on the Dinmore Manor Estate, Bartle looks after the herd of pedigree Limousins on behalf of Paul Dawes.

He said: ‘The lockdown allowed us to get on with a lot of jobs but we’re missing meeting up with the people we only ever see at shows. It’s also meant that we’ve not been able to promote what we do and that’s had quite an impact on sales. Everything has been happening online but it’s not the same.

‘Moreton Show is an especially good show because a lot of farmers get there and it would be unusual for people not to make inquiries. It’s one of the shows where we can see everyone in one place. I think you tend to deal with people you like and the show is where we can make contacts and have a drink and discuss business, face-to-face. There’s no substitute for that.

‘I am, though, an eternal optimist and I think we’ll go back to something like normal. It’s essential to our business. Through this crisis, I do believe that the farming community has regained its connection with the public because they want to know where their food comes from. We have to keep that connection going and shows are really important in making that happen.’

Moreton Show as a social hub is clearly an important factor in its success. Tom Stayt, a fourth generation Cotswold farmer based at Church Westcote, is one of the country’s top breeders of white-faced, biscuit colour-dyed Berrichon sheep. He said: ‘We’ve had a family connection with Moreton Show for years and we love it. It’s the last big show of the season and the last chance for us to get together with the breeders who come from all over the country. We host a bar-b-que and drinks and it’s a lovely way to bring the summer to a close.

‘This year has been different and while I’ve not missed the hard work of preparing for shows, I have missed meeting people and doing business face-to-face. We’ve been doing a lot on social media and still selling rams and sheep through sending photographs and it’s important that we keep up with the times. We’re reaching a lot of people but social media is only a tool and you can’t replace seeing people face-to-face, old fashioned bartering and seeing the sheep in front of you.

‘Agricultural shows have come back in fashion. People want to know where their food comes from and learn about the countryside. I believe shows will be back and our aim is making the Berrichon competitions at Moreton Show bigger and better in 2021.’

As a registered charity, Moreton Show is dedicated to promoting farming, agricultural practices and rural crafts and it’s vital for its future that youngsters get involved, learn more about the countryside and even take part. Lydia Heywood, the young Cirencester-based rider and Jamaica’s only international three-day eventer, competed at Moreton Show last year with her horse, BonmahonJD and is looking forward to returning in 2021. ‘I love Moreton Show,’ she said. ‘It’s traditional, it’s everything you expect in a country show and the equestrian competitions are a good opportunity for riders like me to work with young horses on grass.’

Lydia, who works with youngsters at the City Riding School in London as well as the Ebony Horse Club in Brixton, has a dream of competing for Jamaica at the Paris Olympics in 2024. ‘I’m currently working with young horses and a budget but competing at the Olympics is still a possibility,’ she added. ‘I love the heritage of the show and I hope it’s around forever.’

Making sure Moreton Show stays around forever is uppermost in the mind of Tom Hayman-Joyce, whose father, James has twice been chairman of the society. ‘I’m going to have a free Saturday at the start of September where normally I would be extremely busy,’ he said. ‘I will very much miss the social side of the show, meeting the public, the volunteers and fellow professionals. Many of those I probably only see at the show and this is what makes it such a special occasion. Moreton Show does come across as an event where you see and catch up with people.

‘I’m missing working with all the volunteers who make the show what it is and, of course, with only a couple of weeks to go, I’m missing the buzz of getting everything ready.

‘I’ve grown up with the show. I can remember coming as a young child and at five or six, I can certainly recall helping the team set things up. I’ve been volunteering or stewarding ever since and in 2010, I was invited to sit on the council, which runs the society and organises the show. For 10 years, I was in charge of everything that happened in the Grand Arena, a big job with a lot of responsibility but enormous fun.

‘To follow in my father’s footsteps as chairman is a huge honour and, like so many people, I’m optimistic that we will see Moreton Show return next year.’