Next Generation Shine at Moreton Show 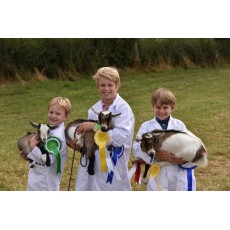 Moreton Show celebrated its 70th anniversary with record entries, rising standards and an exceptional showcase of livestock and horses from the next generation of young farmers and exhibitors.

In every section on the 165-acre showground, it was notable that youngsters were getting involved in showing livestock, exhibiting arts and crafts and enjoying what this one-day agricultural show had to offer.

On a day when large crowds flocked to the Batsford Estate on the edge of Moreton-in-Marsh, events in the main arena came to a spectacular conclusion with one of the biggest Grand Parade of Champions ever seen. It was a breathtaking display of cattle, sheep and goats which, at times, had the commentator full of praise for British farming.

At the microphone was Mark Cleverdon, from Wittersham in Kent, a renowned livestock auctioneer and Moreton Show regular who commentates at several shows throughout the summer. He said: ‘I see a better line-up at Moreton Show than anywhere else. It is exceptional.’

Among those leading the way in the Grand Parade were Sophie Harvey and her father, George from Balfron, Stirlingshire with their Poll Hereford, Harvey Bros 1 Crocus Rose, winner of the Dulverton Bowl as the show’s Supreme Cattle Champion.

Meanwhile, a familiar face in the arena was Paul Dawes from the Dinmore Manor Estate in Herefordshire, which for the third year in a row picked up the prestigious Selekt Three Shires Trophy and £1,000, awarded for points accrued from showing at the Hanbury Show, Burwarton Show and Moreton Show.

Rose Bostock, from Shipston was also there with her Kerry Hill ewe, named Supreme Champion Interbreed Sheep while the Cotswold Sheep Young Handler Champion was Bridget Coombes from Burford, who took to the show ring with Nero. She said: ‘It’s absolutely amazing to win.  I would say to any young person ‘just go for it’. You learn so much.  It means so much to me to win because this was my grandad’s animal and he died last September. It means the world to me to win.’

Livestock Secretary, Lynne Parkes said: ‘It was a fabulous display and was probably the biggest grand parade we’ve seen at Moreton Show for many years. Numbers were up in many sections, including British Berrichon sheep, which attracted some 70 exhibits from as far afield as Lincolnshire and Wales.’

Goats are an increasingly popular feature at the show. Edward and Stephanie Bull from Burbage in Wiltshire secured a third win in a row in the Dairy Goat section with Aphrodite Ariadne, named Supreme Champion. Stephanie, who was presented with the Simon Randall Challenge Trophy by the Moreton Show Society president, Simon Randall CBE, led Aphrodite Ariadne in the Grand Parade. She said: ‘To have the best in show in the 140th year of the British Goat Society makes this extra special.’

Top honours in the Pigmy Goat competition went to Dreamers Hebe, owned by Tracey Cater from Studley in Warwickshire.

Always a popular attraction is the Home and Garden Marquee, where chair, Ros Allen said entries were up and the standards were higher than ever. She added: ‘It was very difficult to judge many of the sections because the standard was so high. It was especially pleasing to see so many new entrants and a record number of photographs in competition which were of a very high quality.’

Elizabeth White, from Longborough, took home three trophies for her baking and preserves while at the age of 86, George Proverbs proved why he is one of the country’s top exhibitors by winning the National Chrysanthemum Society Silver Medal. George, from Colesbourne in Gloucestershire has won this medal more than 20 times.

In the equestrian competitions, Ian Maye on Millfield Figaro won the Six Bars Challenge while Temple Ogue, a seven year-old bay gelding owned by Kay Campbell and ridden by Jayne Ross was named Supreme Horse Champion for the third year in succession.

All the results will be available on the Moreton Show website at www.moretonshow.co.uk

Ed Hicks, Moreton Show chairman, said: ‘We are thrilled with our 70th anniversary and it’s given us a great springboard for the next 70 years.  We are so grateful that people continue to come and support us.

The work of the Moreton-in-Marsh and District Agricultural and Horse Show Society continues with the annual ploughing match on Saturday, October 26, hosted by Ken Brain at Peters Farm, near Broadway.

Next year’s Moreton Show is on Saturday, September 5.